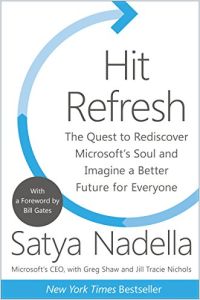 When he became Microsoft’s third CEO in 2014, Satya Nadella knew Microsoft had to change its culture to prosper; the core aspects would be empathy and access. With 24 years of Microsoft experience, Nadella countered institutional complacency with the view that Microsoft had to expand its global reach. He embraces the idea that technology can transform lives by improving distribution of goods and services and by helping society solve problems such as global warming with advances in quantum computing. Writing with Greg Shaw and Jill Tracie Nichols, Nadella is optimistic that humans, given the tools, will work together to make the world a better place. He says Microsoft promises such tools. If Microsoft’s current success is any indication, a well-defined corporate culture that coordinates with its partners to deliver a better life to billions of people is a winning formula. Yet Nadella knows that the success of his bold, optimistic vision also depends on cooperation from partners, governments and citizens working together.

When Satya Nadella learned he would become the third CEO in Microsoft’s 40-year history, he asked himself, “Why does Microsoft exist? And why do I exist in this new role” as CEO? Over the course of his 24 years at Microsoft before his appointment, Nadella had perceived fossilization in its culture and drift from its core values. The company needed to return to its original mandate: democratizing technology and enshrining empathy as a value. As the father of a child with special needs, Nadella understood technology’s awesome power to improve lives. He wanted empathy to drive Microsoft’s transformation.

In 2008, Microsoft was in danger of becoming obsolete. It was falling behind Apple and Google in smartphone and tablet technology as well as in search and online advertising. As data collection on servers became more costly and unwieldy, cloud technology emerged as the next frontier. Investing in massive data centers by pooling resources would transform the economy of computing. ...

The Customer-Driven Culture: A Microsoft Story
9
Go Tech, or Go Extinct
8
The Curious Advantage
9
The Invincible Company
9
The Purpose Mindset
8
The Quantum Leap
8