Summary of How Does Gender Equity Affect Women in Retirement? 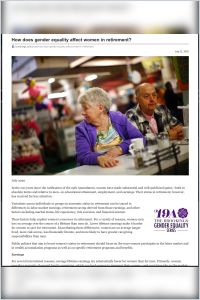 Brookings Institution economic policy researchers William Gale and Grace Enda explain how the 19th Amendment overlooked issues of female poverty in retirement and offer ideas for rectifying the gaps. Women have less money in retirement due to their longevity and caregiving roles as well as – in the United States – the impact of government policies. To lessen the number of elderly women below the poverty line, the government could change how it calculates Social Security benefits and implement an “automatic IRA program.” This report provides important information for policy-makers, elected officials, HR directors and women dealing with retirement.

William G. Gale is director of the Retirement Security Project for the Brookings Institution as well as a senior fellow. Grace Enda is a senior research assistant in the Economic Studies program.

In the last century, gender inequality has decreased in the workplace, but equality in retirement remains elusive. Statistically, women earn less than men over their lifetimes, are less fluent with finance and live longer than men.

One main reason women earn less is that they usually provide unpaid care for their families. This requires them to leave their careers and take lower paid jobs of greater flexibility. If a woman in her 20s or 30s follows this path, she incurs a significant loss of lifetime income. One study showed that mothers in the United State incur a 28% loss in earnings, while fathers remain unaffected. Similarly, women older than 50 who leave work to care for elderly parents stand to lose about $142,000 in earnings as well as losing the related long-term Social Security benefits.

During their working years, women make less than men for...

Once More Unto the Breach
8

A Woman’s Guide to Salary Negotiation
7