Summary of How Hong Kong Got To This Point 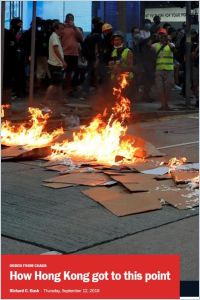 Hundreds of thousands of pro-democracy protesters have been taking to the streets of Hong Kong demanding greater autonomy from China. Richard Bush, a senior fellow at the Brookings Institution’s Center for East Asia Policy Studies and a former Hong Kong resident, explains the history behind the mass protests in a short, informative essay. He ends his essay with a plea to protesters not to overplay their hand and instead find a pragmatic solution to their legitimate political aspirations.

Richard C. Bush is a senior fellow at the Center for East Asia Policy Studies at the Brookings Institution.

Following its reversion to China, Hong Kong has been enjoying Western-style rule of law but not a fully democratic political regime.

In 1997, the former British colony Hong Kong again became sovereign territory of China. A negotiated agreement between the United Kingdom and China formed the basis of the Hong Kong Basic Law, which granted Hong Kong people Western-style civil and political rights, as well as an independent legal system based on common law and thus separate from mainland China’s legal system. Hong Kong residents have been exercising their civic rights, especially their right of assembly, by organizing demonstrations on an almost daily basis.

Yet the reversion agreement did not provide for popular democratic elections. Hong Kong’s people can only elect half of their Legislative Council, while mostly pro-Beijing constituencies fill the remainder of the seats. This political arrangement...

Is Taiwan the Next Hong Kong?
8
China’s War on Taiwan Won’t Start in Taiwan
8
Vaccine Diplomacy
8
The Taiwan Temptation
9
There Will Not Be a New Cold War
8