Summary of How is COVID-19 affecting US trade? 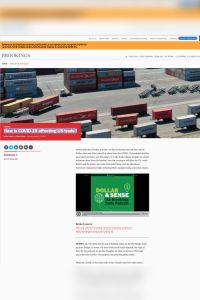 The COVID-19 recession has upended global trade, and its impacts across and within economic sectors are asymmetric. Some industries are faring better than others: US imports of pharmaceuticals have increased, while exports of services such as hospitality and tourism have been decimated. The Brookings Institution’s David Dollar and Anna Newby discuss the trade data’s implications for the US economy in this illuminating episode of the Dollars and Sense podcast.

The coronavirus pandemic is affecting American imports and exports in different ways.

The pandemic’s recessionary impacts have been greater on US imports than on exports. In the first half of 2020, compared to the same period in 2019, US crude oil imports declined some 40%, as COVID-19 lockdowns curtailed people’s driving. Car imports also experienced a steep drop. And US television and cell phone imports decreased by 25%, likely due to consumers’ income uncertainty. Pharmaceutical imports, though, jumped about 15%.

US exports are down by 16% overall in the first six months of 2020.  Hardest hit are America’s exports of services, which fell by 50%. Among these services are those provided to foreign tourists and students, who would typically spend on lodging, meals, entertainment and education. However, US exports of financial services and telecommunications have remained constant. Disparities also show up in different manufacturing areas: Exports of aircraft and car parts dropped between 30% and 40%, while those of semiconductors rose by 12%.

The COVID-19 recession tells an interesting story about trade relations.

The US–China trade conflict carries on in the midst of the worldwide coronavirus recession. In the first half of 2020, America’s imports from China fell by about 20%. But US imports from Mexico and Canada also declined by 20%. These data indicate that the recession is the bigger story in the trade disruption than the US–China disputes are. Furthermore, US goods going to Canada and Mexico were off by 20%, compared to only 5% for China. During the first half of 2020, all of North America was experiencing a deep recession, while China had already begun its recovery.

“The recession is a lot more important than the trade war.”

The global slowdown puts the Trump administration in an odd position with its 2017 phase-one trade deal. Does the United States scrap the agreement because of China’s failure to meet the terms, or is the larger picture more important? The pandemic makes some conditions difficult, if not impossible, to meet. COVID-19 containment policies put a moratorium on travel; thus, stipulated increases in US exports of hospitality cannot take place. And the low demand for crude oil restricts those US exports to China. Financial markets would likely not react well to the administration’s abandonment of the trade deal.

Examining the complexities of value chains helps to sort out the debate on reshoring.

China manufactures many items exported to America, but few are from American companies. Instead, most US firms operating in China are serving local markets. It would not make sense for those businesses to reshore goods to the United States and then export them to China. Items produced in China for export to the United States come largely from Korean, Japanese and Taiwanese firms. Bringing the production of merchandise like electronics, photographic equipment and televisions back to the United States would be too expensive, especially when other Asian nations like Vietnam are part of the finished goods’ supply chains.

Returning manufacturing to the United States would be prudent for certain goods. Examples are items related directly to American national security, like some pharmaceuticals and advanced technologies. But even these products would be more costly to make in the United States.

The Post COVID-19 World
7
It Is Time to Abandon Dollar Hegemony
8
The Pandemic Depression
7
What have we learned from the trade war with China?
10
The Future of the Dollar
8
The China-U.S Trade War and Future Economic Relations
8