Summary of How Legal Weed Destroyed a Counterculture Icon 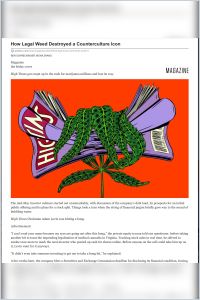 Ben Schreckinger and Mona Zhang explain in Politico Magazine how High Times, the magazine that celebrated all thing cannabis, lost its buzz. In its heyday, the magazine featured tips on smuggling marijuana, smoking it, growing it and the lawyer to call when you got caught. The authors take you from getting to know the magazine’s founder – who sold weed on the side and distributed the first issues through his drug dealer network – to tracking how the magazine survived the government’s war on drugs. Then pot became legal, and High Times burned out in pursuit of “green” profits.

High Times, the marijuana magazine, has catered to stoners, growers and activists since 1974.

In May 2020, board chair Adam Levin presided over a High Times’ investor webinar; weeks later, the SEC stopped his stock offering because the company didn’t submit a financial disclosure in time.

True to the magazine’s outlaw agenda, it spawned plenty of drama on the ride to today’s increasing marijuana legalization in the United States: a murder, a suicide, the war on drugs and a trio of federal grand jury probes. Now, interviews and lawsuits indicate that the company turned away from its “credibility in cannabis circles” to try to cash in on the “green rush” – and failed.

Founder Gary Goodson, born in Phoenix in 1945, served in the Air Guard before starting his first counterculture magazine, Orpheus. He was short, with long hair, a dramatic mustache and a fondness for big hats. He adopted a new name, Thomas King Forcade, to spare his family’s reputation.

In 1969, after a covert narcotics investigation, police raided ...

Coronavirus Will Change the World Permanently. Here’s How.
8