Summary of How Pandemics Change History 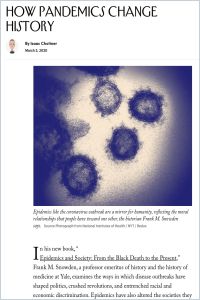 Each epidemic is unique in how society regards it. The public saw the black plague as egalitarian, yet it perceived TB as a disease of the elite and artistic. In time, COVID-19 will have its own place in history. The New Yorker’s Isaac Chotiner interviews medical historian and author Frank M. Snowden, who reflects on governmental and global organizational actions over the past several months. The current pandemic, Snowden says, offers humanity the opportunity to unite. In history, epidemics affected art, politics and religion. How will this pandemic change today's society?

Against the backdrop of the current COVID-19 pandemic, Yale professor emeritus and medical historian Frank M. Snowden, author of Epidemics and Society: From the Black Death to the Present, discusses diseases and epidemics through history. He reflects on how the plague, yellow fever and tuberculosis (TB) affected society, art and politics. And, he considers the initial reaction to COVID-19.

Major onslaughts of disease reveal fundamental aspects of individual and societal thinking because widespread disease makes people consider their mortality. Pandemics highlight humankind’s connection to nature and the man-made environment. The COVID-19 pandemic forces people to realize that everyone worldwide is part of the same species and equally susceptible to disease.

We need…to realize…that what affects one person anywhere affects everyone everywhere.

Snowden believes that by killing “half the population of full continents,” the bubonic plague drastically changed the world economy and people’s perception of God. He believes the results of those changes manifested in the Industrial Revolution and the emergence of slavery as an institution.

In the modern world, people comfortably accept that cholera and TB will affect those of lower social class and meager financial means. World Health Organization China mission leader Bruce Aylward told Snowden that people need to change how they think about such epidemics. After his return from China, Aylward stressed that preparation for a global attack requires people to unite and work together. The “most vulnerable” individuals determine everyone’s health. Without a change toward unity, people won’t be able to deal with a pandemic. Snowden isn’t optimistic about humanity’s ability to make this change.

Pandemic diseases bring out the best and worst of humanity.

For an example of bringing out the best in people, members of the nonprofit Doctors Without Borders work with whoever needs them most. This was the case that during the Ebola outbreak and continues now during the COVID-19 pandemic.

A great human moral drama is being played out in front of us.

Widespread disease can shift societies. An onslaught of yellow fever helped bring about Haitian independence. Napoleon sent troops to overcome a slave rebellion on the island, but the African slaves there were immune to yellow fever, and Napoleon’s soldiers were not. The fever decimated his army. Yellow fever caused Napoleon to bow out of the New World and agree to the 1803 Louisiana Purchase.

In China’s initial reaction to the COVID-19 pandemic, the government used the military and police to quarantine cities and provinces on January 23, 2020. Wuhan city has a population of 11 million people, and Hubei Province has almost 60 million residents. This action was as draconian as the steps governments took during the bubonic plague.

The official Chinese reaction suppressed information, though information is essential to public health. Snowden points out that as Chinese officials instituted quarantines, they ignored the modern infection control policy of tracking and isolating individual cases. While he understands that the World Heath Organization wanted to avoid rebuking its largest member, he was glad to see the Chinese government move away from using only quarantine and toward tracking cases and disseminating information.

People view epidemics as being as unique as individuals.

Throughout history, societies responded to epidemics based on the number of people killed, the amount of pain the sufferers endured and whether people thought the disease came from a foreign country. Because of the number of deaths and the speed with which death came during the plague, people focused on how fleeting life can be. Artists had their own responses, rendered in depictions of “sudden death, repentance” and people preparing their souls for death.

I think it’s a story of more than one response. It wasn’t all bad, and not all good.

For a more modern take, Snowden says, consider the Ingmar Bergman film, The Seventh Seal. Although set at the time of the plague and styled with the appropriate artistic elements of the time, it is an allegory for the “plague” of nuclear war.

In the Romantic era, people saw TB as a disease of artistic, refined and wealthy people. Unlike the plague, which killed indiscriminately, people believed having TB was a badge of artistic honor. French artist Henri de Toulouse-Lautrec painted incredibly thin women and applied rice powder to their faces to mimic the pale TB look. Fashion sought to follow that look as well. Friends told French novelist Victor Hugo that if he’d had tuberculosis, he would have been a better writer. As TB ebbed in the United States at the end of the 1800s, one writer mourned a parallel impending loss of artistic, scientific and cultural creativity.

Science developed the germ theory, which turned TB from a disease of the elite to that of those who were unclean and impoverished. Thoughts about the disease also changed immediately, as Snowden points out. In André Gide’s novel The Immoralist, for example, the author regards his TB as the worst possible disease. TB lost all its glamour, but none of its deadliness.

Napoleon viewed the impact of yellow fever as a “personal insult,” with no regard for his soldier’s lives.

Epidemics and solipsism are the two things that human nature can’t conquer.

In this latest round, Snowden doesn’t see the coming year as going well. As of this interview in March 2002, he found that White House officials weret down playing the severity of COVID-19, and worried that some of the people leading the effort to control it “don’t even believe in science.”

Isaac Chotiner writes interviews for The New Yorker. His work has been published in numerous newspapers and magazines. Frank M. Snowden is the author of Epidemics and Society: From the Black Death to the Present.