Summary of How the West Was Lost 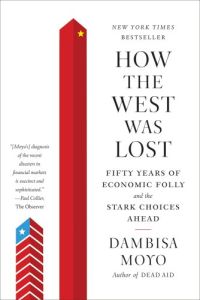 Many believe the West will always be on top of the world’s economy, as it has been for the past 500 years. However, if the competition for global economic dominance were an upcoming horse race, according to economist Dambisa Moyo’s pessimistic read, Europe would face long odds, America would be even money and China would be the hot favorite. Moyo explains why she believes the US and other Western countries’ financial fortunes are fading, while the smart money is on China, India and the other “Rising Rest” nations as good bets to come up on the outside. While always neutral about political conclusions, getAbstract recommends Moyo’s well-argued – though sometimes feverish – presentation to those interested in considering various scenarios for the global economy’s future.

Dambisa Moyo is an international economist specializing in macroeconomic and global affairs. She is also the author of Dead Aid and appeared on Time’s list of the “100 Most Influential People.”

The West Is Down, While the “Rising Rest” Is Up

In 2008, the Abu Dhabi government’s investment organization spent $800 million for one of the US’s most iconic structures, the Chrysler Building, in the heart of New York City. In just the first half of 2008, investors from the Middle East spent an additional $1 billion on other US commercial real estate properties.

Non-Western investors’ purchases of major US and Western assets are apt to continue to increase in the aftermath of the 2008 crisis. In the past few decades, Western powers have frittered away their wealth, influence and dominant global positions. Now, non-Western nations are rapidly expanding their economies. Consider these trends:

Eagerly lining up to replace...