Review of How to Stop Brexit 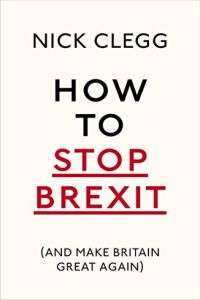 The Brexit vote of 2016 was a particularly painful blow for Nick Clegg. Proudly pro-Europe, the prominent Liberal politician watched his countrymen reject membership in the EU, while Labour leader Jeremy Corbyn did little to dissuade them. In this concise volume, Clegg strikes a conciliatory tone. While it might have felt cathartic to cast off Brussels and its myriad rules, he argues, Brexit will harm most British financially. Clegg acknowledges that Britain needs tighter immigration controls than it got from the EU, and he refrains from castigating those who voted for Leave. Clegg saves much of his anger for Boris Johnson, Michael Gove and other leaders who, he claims, misled the public about Brexit. Clegg urges his fellow citizens to rethink their stand on Brexit and do what they can to stop Britain’s separation from the EU. Though Clegg writes with passion, his short book received decidedly tepid reviews in London. Moreover, it’s unclear whether voters really want a second shot at Brexit. getAbstract recommends this easy-to-digest overview to readers looking for a distillation of the Remain viewpoint.

Nick Clegg was leader of the UK’s Liberal Democrats from 2007 to 2015 and deputy prime minister from 2010 to 2015. An MP from Sheffield Hallam, he speaks five languages.

Time for a Brexit Do-Over

When British voters decided in favor of leaving the European Union in 2016, Clegg argues, they made a mistake. They voted based on the facts and expectations presented by the proponents of Leave, which today appear to have little relationship with the realities of Brexit. Happily, one of the hallmarks of a free democracy is the ability to course correct. In Clegg’s view, there’s no reason that voters must stick to their guns and continue to support Britain’s separation from the EU. Given the wave of uncertainty that has plagued Britain since the referendum, he finds it only reasonable that voters should get a do-over.

Clegg goes on to explore the complicated history of the relationship between Europe and the United Kingdom. The English Channel, he writes, might measure just 18 nautical miles wide at its narrowest point, but the British feel a psychological separation from the continent that belies their geographic proximity to its shores. This sense is bolstered by the knowledge that no force has conquered Britain since 1066 – a boast no other European nation can make – as well as the fact that English has become the dominant language of Europe. Debate within the European Parliament, for instance, is conducted in English. Moreover, while the other great powers of Europe dropped their own currencies for the euro, Britain kept the pound.