Summary of How Venture Capitalists Are Deforming Capitalism 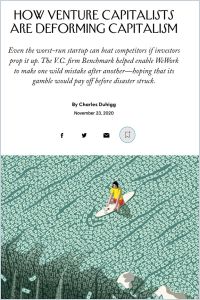 Journalist Charles Duhigg pens a captivating narrative about the ascent of WeWork, its legion of venture capital backers and the ultimate unraveling of the firm’s lofty prospects. But Duhigg also highlights the frenzy surrounding the VC ecosystem, as speculative investors seek out the next big payday with less concern about nurturing new businesses and fostering innovation. Entrepreneurs and investors interested in an intriguing examination of VC will find this a compelling story.

Pulitzer Prize–winning journalist Charles Duhigg is the author of The Power of Habit and Smarter Faster Better.

Despite the company’s lack of profits, venture capitalists poured billions into WeWork to fuel its growth.

Eleven years before WeWork pulled its initial public offering in 2019 and its founder, Adam Neumann, left the company, entrepreneurs Jeremy Neuner and Ryan Coonerty started NextSpace Coworking. The business was profitable in its first six months. Eager to expand, Neuner sought out venture capital, but he ran into the WeWork freight train. Neuner learned that investors were in awe of Neumann and WeWork, despite the fact that the company was hemorrhaging $6 million every month. NextSpace was profitable, but the VC crowd was unimpressed.

What Is Venture Debt?
7
Secrets of Sand Hill Road
8
The Power of Creative Destruction
8
Investment Banking Explained
7
The Key Man
8
Winning in China
8 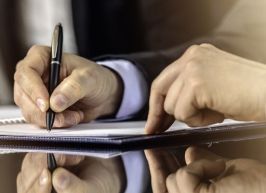