Summary of How White People Handle Diversity Training in the Workplace 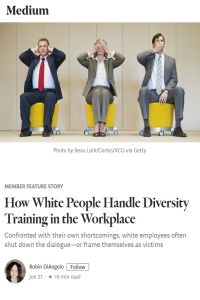 Consultant Robin DiAngelo runs diversity training workshops and sees many participants get defensive. She’s trying to help people see that their actions may be racist even without malicious intent – that they may harbor biases even if their “best friend is black.” DiAngelo pleads for an open mind in assessing one’s own biases and humility in understanding other people’s perspectives. getAbstract recommends DiAngelo’s thought-provoking essay to white people who strongly feel they’re not racist and to HR managers who are organizing diversity trainings.

Most white people are unprepared to talk about race and shut down when they’re told their behaviors are racially insensitive. Thanks to this “white fragility,” facilitator Robin DiAngelo spends a lot of time trying to reason with hostile, defensive participants at her diversity training workshops. The drama distracts from constructive conversations about making workplaces more inclusive of people of color.

“White fragility functions as a form of bullying: ‘I am going to make it so miserable for you to confront me – no matter how diplomatically you try to do so – that you will simply back off, give up and never raise the issue again.’”

In one seminar, a white woman claimed she had no racist ideas because she grew up in Germany knowing no black people. DiAngelo suggested that she may have been exposed to racist depictions of Africa or biased images of African Americans in movies. She also asked whether the woman had formed any impressions of African Americans since moving to the United States. Deeply offended, the woman refused to go to another one of DiAngelo’s workshops. White people in DiAngelo’s workshops often respond sulkily, angry or hurt. Because many white people think only “mean people” can be racist, they are easily offended when someone calls them out. Such reactions shift the focus of the discussion to white training participants and allows them to dismiss their own role in maintaining a system that benefits them at the expense of nonwhites.

“I then ask [nonwhite training participants], ‘What would it be like if you could simply give us feedback, have us graciously receive it, reflect and work to change the behavior?’ Recently, a man of color sighed and said, ‘It would be revolutionary’.”

Preschool kids already start thinking about race. Usually, their assumptions go unexamined as they age. Adults, especially liberals, oppose racism on a surface level but say they’re ”victimized, slammed, blamed and attacked” when someone challenges their views on race. These metaphors themselves mirror racist assumptions that “people of color (particularly African Americans) are dangerous and violent.”

Some organizations told DiAngelo they delayed diversity initiatives because of the “trauma” it caused white participants. In the meantime, their workforce remained predominately white. White fragility is an effective weapon because it browbeats people of color into staying quiet and “in their place.” Many people of color no longer believe in providing constructive criticism or initiating conversations about unintentional, hidden racism. If whites could approach conversations about race with humility, acknowledge even unwitting responsibility and constructively work toward change, it could lead to deep social change.

11 Anti-Racist Actions You Can Take at Work – Today and Every Day
8
The Antiracism Starter Kit
9
Race and the Newsroom
8
Time to Capitalize Black and White
8
What Does It Mean to Be a “Karen”? Karen Explains.
8
Olympic Icon Flo Jo Raced to the Top and Took Us with Her
8