Summary of How Wirecard Went From Tech Star to Bankrupt 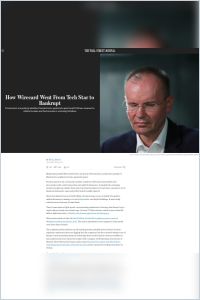 Enron, Tyco and WorldCom: Now add to this list of massive corporate accounting frauds the name Wirecard, a global transaction and payment processor that on June 17, 2020, carried a market valuation of $14 billion but was declared insolvent a week later. The swift implosion arose from deceptive accounting practices and a $2 billion cash shortfall. In this compelling and detailed narrative, Wall Street Journal reporter Paul J. Davies explores Wirecard’s shadowy world.

Paul J. Davies is a senior markets reporter for The Wall Street Journal in London.

Wirecard is another corporate story of accounting fraud and deceptive financial practices.

Same story, different decade: The case of Wirecard resembles past complex scams that have deceived investors, analysts and auditors through bogus business activity. In the early 2000s, Enron was the bad actor; now Wirecard has taken on that mantle.

Wirecard was a high-flyer, or so it seemed. In its financial statements, the firm claimed that it executed $140 billion in transactions annually for some 225,000 clients. This volume made it a competitor to Wall Street juggernaut companies like Square and PayPal.

Auditors could not verify $2 billion in liquid assets, and within eight days, the company declared bankruptcy...