Summary of Humans Are Underrated 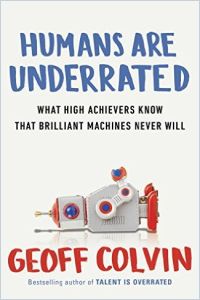 Will computers take your job? According to financial journalist Geoff Colvin, they’ll take the “cognitive” work but not the “interaction jobs.” He rejects the “nightmare future” scenario of jobless humans supplanted by brilliant, all-purpose machines. Instead, he reports on the emerging socioeconomic value of being human – and, because empathy is the new incalculable skill, the more human the better. Human beings naturally bond with each other and many jobs depend on that bonding. People must relearn how to connect in person. Colvin cites research and case studies showing the value of empathy in social life, work, sports and even in combat. He says “relationship work” is the new knowledge work. getAbstract recommends his fresh, far-reaching insights to CEOs, HR professionals, leaders who want to “humanize” their organizations and job hunters who similarly want to maximize their personal value in the digital age.

Senior editor at large for Fortune magazine, Geoff Colvin also wrote Talent is Overrated: What Really Separates World-Class Performers from Everybody Else.

With the speed and sophistication of computers accelerating by the day, what job skills can people bring to the table in the future? IBM’s massive Watson computer creates recipes and beats humans in quizzes; Google’s car drives itself. Information technology (infotech) capability doubles every two years. How can people compete?

Are you facing a sci-fi, employment “nightmare” that renders humankind redundant? One minute your boss tells you that the new IT system will give you more freedom to work; the next, you don’t have any work. Production facilities need “capital and labor,” but corporations now spend that capital to buy machines that do an ever-greater range of jobs.

This is not new. The nature of work has evolved under technology’s onslaught since the first great socioeconomic turning point, the Industrial Revolution, which challenged artisanal workers. The advent of electricity shaped the second turning point, enabling sophisticated factories that needed more skilled workers. Yet, those changes brought increasing prosperity. The third shift came in the 1980s as infotech replaced people in some repetitive back office and ...