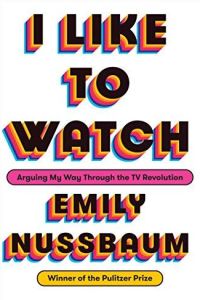 Arguing My Way Through the TV Revolution

From the 1950s to the 1990s, many Americans criticized television as a low-quality form of entertainment.

Nussbaum begins with a critical history. Starting in the 1950s, she notes that many critics derided television programming as “junk” unworthy of the serious criticism that movies and books inspire. In the late 1990s, she explains, the structure of most TV shows was the same as in the 1950s – with episodes airing weekly at set times, interrupted by commercials. As a teenager, “I memorized Monty Python sketches,” the author writes. “But I also regarded TV the way Americans had been taught to, since the 1950s. Television was junk.”

Nussbaum cites as a crucial influence the New Yorker writer George W.S. Trow, who derided television in his essay “Within the Context of No-Context” – initially published by The New Yorker in 1980. Trow regarded TV as malevolent mass medium because it determined the value of a program based on the number of viewers it attracts, conflating popularity with quality.

Emily Nussbaum, a writer for The New Yorker since 2011, won the 2016 Pulitzer Prize for Criticism and the 2014 National Magazine Award for Columns and Commentary.