Summary of I'd Like the World to Buy a Coke 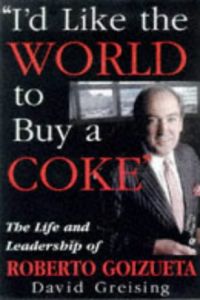 This is a good business biography. The author has an eye for the interesting detail - such as the fact that the future chairman of Coca-Cola and the future Yankee-hating Communist leader Fidel Castro went to the same elite Cuban private school. He also has a good understanding of the business issues that Roberto Goizueta addressed during his remarkably successful career. This is not a hagiography or an "authorized" biography. In fact, author David Griesing reports that Goizueta opposed the book project and directed his friends and the public relations department of Coca-Cola not to cooperate. Remarkably, in the face of that opposition, the author not only persevered but also produced a book that seems scrupulously objective. If it is not a paen, neither is it a hatchet job. It’s the real thing, and getAbstract.com finds it well worth reading and recommending.

David Greising is a business columnist at the Chicago Tribune and former Atlanta bureau chief of BusinessWeek magazine. He covered Goizueta and Coca-Cola from 1994 to 1998. He is also author of Brokers, Bagmen & Moles: Fraud and Corruption in the Chicago Futures Market.

Born in Cuba, the scion of an aristocratic family, Roberto Goizueta learned proverbs that distilled practical lore and wisdom from his Basque-immigrant grandfather. Years later, as chairman of Coca-Cola, he used these proverbs — such as, "If your neighbor's beard is on fire, make sure yours is soaking wet" — to illustrate his points at meetings.

Goizueta greatly respected his grandfather's practical business sense. The old man had emigrated from Spain and started out small, selling typewriters and air conditioners. He worked hard, paid close attention to cash flow and was very cautious about borrowing. When he saw that the Cuban sugar mills were always in the market for the bags their workers used to pack sugar and that they paid steeply for the bags, Goizueta's grandfather bought land. He didn't raise sugar — instead, he raised the plants used to make bags. He saved steadily and during the Great Depression he was able to buy shares in sugar mills for next to nothing. The old man's successes carried the family into the upper reaches of Cuban society. They attended some of the better clubs — although, perhaps, not the very best.

The Leader’s Greatest Return
9
Convinced!
9
You May Also Like
9
The Activation Imperative
8
Shut Up and Listen!
6
Leadership in Turbulent Times
9