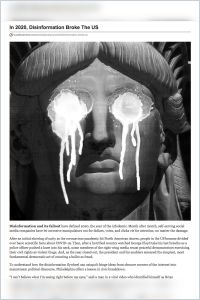 On Digital Disinformation and Democratic Myths
9
The Supply of Disinformation Soon Will Be Infinite
9
Global Warming. Inequality. Covid-19. And Al Gore Is…Optimistic?
9
An Ethics Guide for Tech Gets Written With Workers in Mind
8
How Are We Feeling?
8
Experts Knew a Pandemic Was Coming. Here’s What They’re Worried About Next.
9