Review of In Defence of Politics 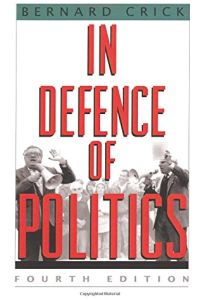 The late Bernard Crick’s text is more than a half-century old, yet it feels ripped from today’s headlines. Crick addresses the roots of nationalism, and warns of the dangers of politics based on racial exclusion and vengeance. All of these issues, it seems, existed long before the fall of the Berlin Wall or the rise of social media. Crick even expounds upon the pitfalls of presidential pride, using Abraham Lincoln as a counterpoint.

Ideological purists may find Crick’s arguments about the imperfect, often disappointing nature of democracy difficult to accept. Indeed, given the dogmatism of modern-day political life, Crick’s assertions that democracy cannot exist without compromise and conciliation go, decidedly, against the tide. His academic prose can be daunting, but Crick’s provocative, yet sober-minded, insights reward those who make the effort to continue reading through the more challenging sections of his book.

The late Bernard Crick was a British political theorist and democratic socialist. He died in 2008.

Politics has gotten a bad rap.

Politics has become a dirty word in many corners of the world – aided and abetted by politicians who play into the discontent with the self-serving use of concepts such as liberty, democracy and free government. But although, as Isaac D’Israeli noted, politics has become defined as “the art of governing mankind by deceiving them,” in truth, Crick argues, politics enables freedom. Politics exists only in the most highly functioning societies, and, despite the naysayers, it stands as a hallmark of liberty. Politics, as defined by Aristotle, steps beyond tribal or religious interests to present the notion of a pluralistic society – one where competing priorities and rival groups must agree to give up some of what they want for the benefit of the broader populace. By Aristotle’s reckoning, a society could do without the messy arguments of politics only if a “perfectly good man” emerged to make decisions on behalf of that society. Aristotle did not believe such a man existed.

Politics is the opposite of ideology – a truism demonstrated by totalitarian societies.

States ruled by tyrants, dictators and despots are, by their very definition, not political societies, Crick writes. In totalitarian regimes, ruling despots attempt to erase all traces of political freedom. The government aims to remake society in accordance with an ideology. While in political societies, conciliation is the underlying glue that holds together democracy, in totalitarian regimes, violence is the driving force. Nazi concentration camps were one of the most dramatic illustrations of the totalitarian tendency toward violence. The Nazis didn’t simply work their victims to death; they killed Jews in gruesome and horrifying ways, using methods designed to sap their victims not just physically, but also, spiritually. Soviet work camps were less deliberately cruel, but they were brutal and deadly nonetheless. Both the Nazis and the Soviets argued that, as enemies of the prevailing ideology, their victims deserved no mercy or dignity.

This Is Not Propaganda
9