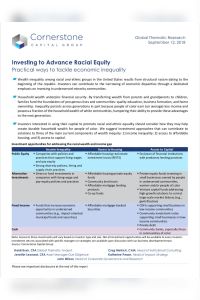 Wealth disparities among ethnic and racial demographic groups continue to be a major economic problem for the United States. While policy officials pursue legislative paths to address inequality, the investing community also has a vital role to play in mitigating financial imbalances. Professionals at Cornerstone Capital Group examine the complex issues of racial and ethnic economic divides and offer pragmatic solutions for advancing financial equality. Investors seeking opportunities to fight these embedded inequities will find instructive insights in this thought-provoking report.

The median levels of income and wealth of white Americans vastly exceed those of the Black and Hispanic populations.

The US record on wealth accumulation for racial and ethnic minorities remains a serious concern. Severe economic disparities rooted in systemic racism exist between white Americans and minority groups, as highlighted by 2016 household data that show median Black American net worth at $17,600; Hispanic American, at $20,700; and white American, at $171,000.

“Wealth inequality among racial and ethnic groups in the United States results from structural racism dating to the beginning of the republic.”

Changing racial and ethnic financial dynamics requires an understanding of how institutional racism has impeded nonwhite groups from amassing wealth. From 1934 to 1968, the Federal Housing Administration (FHA) followed a policy of geographic “redlining,” discriminating against minority groups by restricting FHA funding in certain areas. Only 2% of minorities qualified for loans in that period. As a result, these groups could not gain from the considerable appreciation of housing values and home equity during those decades. Similarly, GI Bill benefits, which provided affordable home financing and tuition packages for veterans after World War II, flowed predominantly to the white population and left minority groups behind. In the aggregate, these two federal programs denied people of color the financial assistance that pushed millions of white Americans into a prospering middle class.

Correcting the wealth gap requires focusing on the sources of the disparity.

The existing wealth gap has three components: “income inequality, access to affordable housing and access to capital.” Median household earnings in 2016 totaled $65,041 for white Americans but only $47,675 for Hispanic Americans and $39,490 for Black Americans.

“Inequality persists across generations in part because people of color earn (on average) less income and possess a fraction of the household wealth of white communities, hampering their ability to provide these advantages to the next generation.”

Housing shows a similar pattern. In 2016, 73% of white people owned their primary residence, compared to 45% of Black and 46% of Hispanic individuals. Caucasians also possess more equity in their homes, worth some $215,800, relative to Black Americans’ $94,400 and Hispanic Americans’ $129,800.Wealth transfers across generations, in the form of inheritances, constitute a significant source of access to capital. These transfers support opportunities for younger family members, such as in financing education and starting businesses. Experts point to higher education as a critical component in creating wealth over the long term.

The investing community can play a significant part in mitigating the financial divides.

Investors cannot change the history of America’s systemic economic racism, but they can help to shrink wealth and income disparities. Investors can allocate capital to businesses that compensate employees with a “living and equitable wage and [that] provide benefits.”

“Investors interested in using their capital to promote racial and ethnic equality should consider how they may help create durable household wealth for people of color.”