Summary of Investing with Purpose 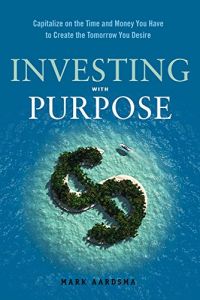 After he lost his job, Mark Aardsma started over with only a few thousand dollars in savings. He took the reins of his life and, over a ten-year period, built a multimillion-dollar business and robust investment holdings. Along the way, he worked out some helpful life lessons on managing time, seizing opportunities and using your resources and talents as an investor. Aardsma presents those lessons with charm and wit in this engaging narrative, though seasoned readers of financial how-to books may find little that’s new. While never giving investment advice, getAbstract recommends his entrepreneurial guide to businesspeople, students and investors seeking counsel on leveraging your talents and passion to achieve your long-term goals.

Mark Aardsma is a CEO, an entrepreneur and investor in early-stage companies.

Mark Aardsma’s journey toward wealth, a secure future for his family, and a life spent doing as he wishes began uncomfortably. After a job loss, he had only a few thousand dollars in savings. He, his wife and their two small children were living through a massive renovation of their 104-year-old farmhouse. The work was only partly complete, but Aardsma could no longer afford to continue it.

Not shirking from the challenge, Aardsma found refuge in his cold, gloomy basement, where he built a makeshift office and began his career as an entrepreneur. Though he lacked a college degree, he had computer programming skills. He began building specialized software applications for clients he found online. With his first $59 sale, Aardsma started to realize his potential. He seized the opportunity to learn how to invest in himself, his resources and his time.

Aardsma’s first step was to identify the big-picture outcomes he wanted to achieve. He connected those long-term goals to a chain of smaller, everyday actions that cascaded, one after the other, and ultimately led to achieving his goals.