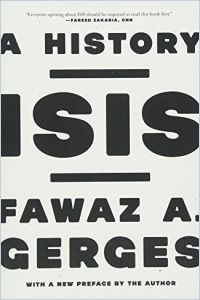 The rise of the ultraviolent Islamic State (ISIS) stands as one of the most troubling geopolitical events in recent decades. In this sober study of the Salafi-jihadist group, Middle East expert Fawaz Gerges spells out the cultural nuances and societal chaos that allowed such a vicious and intolerant organization to gain power. Gerges details the Shia-Sunni split that animated ISIS, as well as the larger forces that opened doors for ISIS, including al-Qaeda, the United States’ invasion of Iraq and Bashar al-Assad’s iron-fisted response to the Arab Spring. Gerges’ account of ISIS’s flourishing remains generally calm and even-handed. getAbstract recommends this well-researched history as a useful, measured companion to on-the-ground accounts that set out to enrage readers. Gerges, instead, sets out to inform readers: a goal he deftly accomplishes.

Fawaz A. Gerges is professor of international relations at the London School of Economics and Political Science. He also holds the Emirates Professorship in Contemporary Middle East Studies.

The Junior Varsity Breaks Out

The rise of the Islamic State (ISIS) in 2013 and 2014 caught the world off guard. In Iraq, with just a few hundred soldiers, ISIS took on and easily defeated the Iraqi military, which the United States had trained at a cost of roughly $25 billion. While American president Barack Obama initially dismissed ISIS as the junior varsity of terror networks, ISIS defied these low expectations, seizing Mosul: an Iraqi city of nearly two million people. ISIS’s stunning success served as a wake-up call to the West and the Middle East, which quickly learned to take the group seriously.

By 2016, however, ISIS – or at least ISIS’s model of a bloodthirsty caliphate – seemed on the decline. The physical caliphate was being steadily dismantled in Iraq, Syria and Libya. The movement was losing turf in Iraq, Syria and Libya, and in May 2016, a US airstrike killed ISIS leader Abu Mohammad al-Adnani. US efforts also hobbled ISIS’s financial networks, and the jihadi movement lost thousands of fighters in battle. Meanwhile, the flow of foreign fighters into ISIS’...

Terrorism
Politics of the Middle East