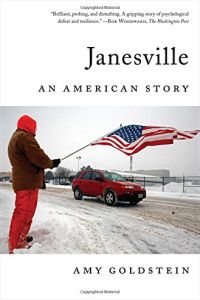 Pulitzer Prize–winning Washington Post journalist Amy Goldstein earned wide recognition for this important entry in a new, sad American genre: stories of loss among the manufacturing middle-class. When General Motors closed its Janesville, Wisconsin, assembly plant in late 2008, the loss nearly ripped the town apart. Writing with grace and skill, Goldstein combines empathy with objectivity in her coverage of the eight years following the closure. She tells the story largely from the perspective of a dozen or so real people who stand in for thousands of others who suffered, sometimes triumphed and occasionally died. Most of those whom the layoff affected have less today than in 2008: less income, less security, perhaps less hope. But they gained inspiration from their community, their neighbors and themselves as they learned that Janesville and its people share unique generosity, resilience and self-reliance. Anyone interested in economic, social and political trends will devour this book.

Journalist Amy Goldstein of The Washington Post is a Pulitzer Prize winner and a former fellow at Harvard University and the Radcliffe Institute for Advanced Study. She immersed herself in the affairs of Janesville, Wisconsin, for five years prior to writing this book, which was listed among 2017’s best books of the year by the Financial Times, The New York Times, The Washington Post, NPR, the Wall Street Journal and the Economist.

Automaker General Motors (GM) arrived in Janesville, Wisconsin in 1919. When GM’s original operation – producing tractors – failed in 1921, the company started making trucks and cars. The plant closed for a year during the Great Depression and made munitions during World War II. Otherwise, the local GM operation made cars, trucks and SUVs for more than eight decades. The plant became a path to the American Dream for generations of families, a central part of Janesville’s identity and culture.

On December 23, 2008, GM Janesville, the automaker’s oldest plant, shut down. The Lear Corporation, its supplier of car seats, closed, too. As a result, just as the worst US economic recession in 70 years began, 9,000 people lost their jobs. Janesville laborers had prided themselves on being among the nation’s most loyal and their union nurtured good relations with management. When GM announced the closing in June, 2008, it gave the plant two years to wind down. The delay and the expectation that the plant...

The Apology Impulse
8
What Did We Know? What Did We Do?
8
The Deals That Made the World
8
Economic Incentives Don’t Always Do What We Want Them To
9
Heartland
9
Indispensable by Monday
7