Japan was once a feared and aggressive military power that invaded its neighbors and provoked America’s entrance into World War II. But no longer, Sheila Smith explains in this history of Japan’s largely submissive stance, postwar. Under pressure from the United States, Japan adopted a constitution that outlawed waging war. Now, decades of peaceful cooperation later, Japan remains skeptical of military force and has refused to build a nuclear arsenal in response to North Korean provocations. Faced with a more belligerent China, however, Japan’s passive pose is under increasing pressure.

Sheila A. Smith is Senior Fellow for Japan Studies at the Council on Foreign Relations and the author of Intimate Rivals: Japanese Domestic Politics and a Rising China. She teaches at Georgetown University.

Once a mighty military power, Japan has significantly scaled back its martial aspirations.

Since its defeat in World War II at the hands of American atomic bombs, Japan has relied heavily on the United States to provide for its defense. Today, Japan continues to rely on diplomacy first; the country has no nuclear weapons and eschews military conflict. As its neighbors grow more quarrelsome, however, Japan’s commitment to peace is being tested. China, Russia and North Korea have flexed their muscles near Japanese territory. What’s more, with the election of President Donald Trump, America’s commitment to Japan’s security has grown less sure. On the campaign trail, Trump suggested that Japan should defend itself from North Korea; and polls show the Japanese people have little faith in Trump’s foreign policy.

The Senkaku Paradox
6
Upheaval
8
The Great Successor
9
Bytes, Bombs and Spies
7
America’s War for the Greater Middle East
9
Ukraine and the Art of Strategy
7 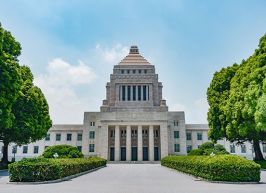