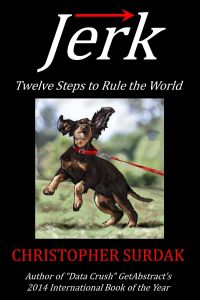 Strategy consultant Christopher Surdak argues that disruptive companies have already figured out that information is replacing capital as the basis of wealth. Surdak calls this shift a “Jerk,” the physics term for “an extremely rapid change in condition – violent, uncontrolled and difficult to contain.” He covers some successful, disruptive Jerk companies, such as Uber and Airbnb, and lays out 12 tactics for your Jerk firm, such as using other people’s capital, turning customers into information-mining partners and creating your own virtual money. Surdak, winner of getAbstract’s 2014 International Book of the Year for Data Crush, is an engaging writer with a knack for relevant historical background, and his presentation is a lot of fun to read. getAbstract recommends his insights to CEOs, investors, strategists in mature industries and, especially, start-up entrepreneurs.

Christopher Surdak is president and CEO of the technology strategy consultancy Surdak & Company. His previous book, Data Crush, was getAbstract’s International Book of the Year in 2014. He also won the 2015 Information Governance Initiative’s Evangelist of the Year Award.

Triumph of the “Jerks”

A new crop of companies is seizing technological trends to disrupt time-honored ways of doing business. These enterprises are Jerk companies, named for a concept in physics where “jerk” describes a sudden change in an object’s condition. You experience a jerk when you hit the brakes in your car or your elevator jolts to a stop. Many mature businesses have suffered a similar shock at the hands of upstart Jerk companies taking advantage of information technology.

Maverick firms such as Uber and Airbnb recognize the commercial value of analyzing mountains of data that billions of people generate daily. Such uses of data have changed the economy from one where capital is the foundation of wealth to one where information is the foundation.

As a taxi company that doesn’t own any taxis, Uber exemplifies the new breed of Jerk companies. Uber doesn’t focus on capital, such as owning rolling stock. It focuses, instead, on the information it collects through its app about the locations of its drivers. It connects that data with information on the location and needs of customers. It then collects more information – such as customer...

The Leadership Killer
9
Wired for Disruption
8
Subscribed
8
Talent Magnet
7
Never Go with Your Gut
6
Crushing It!
9