Summary of Know What You Don't Know 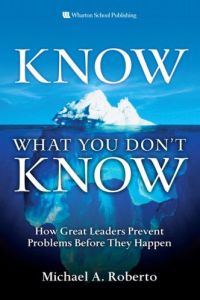 Sir Winston Churchill, Great Britain’s intrepid prime minister during World War II, was an amazingly perceptive leader. He was one of the first to warn of the military threat Germany posed prior to both world wars. How did he know? He routinely sought out rank-and-file members of the British military and low-level English government bureaucrats to find the truth. In the same way, you should dig deeply into your organization for unbiased, accurate information so you can detect problems before they turn into disasters. In his case-filled, albeit pretty much one-note, book, management professor Michael A. Roberto explains why finding problems is harder than solving them. He shows how danger hidden beneath the surface can present the greatest peril to your company. getAbstract recommends Roberto’s engaging book to managers at all levels. Spot those icebergs before they sink your business.

Michael A. Roberto is a management professor at Bryant University in Smithfield, Rhode Island. He is an expert on strategic decision making and senior management teams.

What Don’t You Know?

Most executives see themselves as “problem-solvers” when they should really be “problem-finders.” Ignorance about the crises you may face could lead to your biggest problems. Undetected, minor issues can turn into major disasters. Identify your concerns early, before they become too big to correct.

Some managers sweep small problems out of sight, hoping they will just go away. Many executives worry that revealing a problem will reflect badly on them. Others work for firms that won’t tolerate mistakes and that consider any failure a sign of weakness.

Several hospitals in Australia and the U.S. set up “Rapid Response Teams” (RRTs) to jump on small problems before they become big ones. These teams handle seemingly trivial patient problems that could signal incipient heart attacks. When nurses perceive that a patient is manifesting certain warning signs, such as an unusually slow or fast heartbeat, they have the authority to call in onsite RRTs, whose members can determine quickly if a patient is at risk and then take preventive measures. RRTs are “detecting smoke” for doctors who are “fighting fires.” Staffers at many companies gloss over problems... 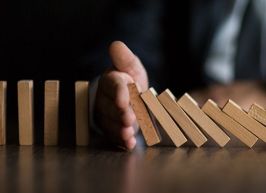