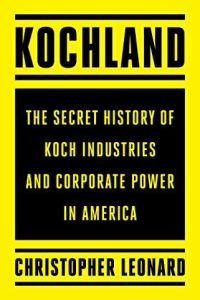 The Koch brothers – Charles and his late brother, David – not only built a massive industrial empire, but also, a conservative political network that has profoundly influenced the American political scene. But who are the Kochs, exactly? How did Koch Industries make its fortune from banal products like fertilizer and diapers and why was it able to accrue so much power in Washington and beyond? Christopher Leonard’s well-researched book tracks the transformation of Koch Industries from a relatively small oil refining company under patriarch Fred C. Koch into the sprawling behemoth it is today.

Award-winning author and journalist Christopher Leonard is the executive director of the Watchdog Writers Group at the University of Missouri and a former Schmidt Family Foundation Fellow at New America Foundation.

When Fred Koch (pronounced “Coke”) founded the original Koch company in Wichita, Kansas, its primary business was oil refining. Fred was politically conservative, believed in limited government and hated communism. He helped create the John Birch Society, a right-wing advocacy group. Fred had four sons: the eldest and namesake, Frederick, who opted for a career in the arts; Charles, who later took charge of the family business; the late David; and David’s fraternal twin brother, Bill.

Charles Koch had a clear vision for his family’s business.

Charles Koch was educated at his father’s alma mater, the Massachusetts Institute of Technology. He was quiet, serious, deliberate, and private. A conservative like his father, Charles admired Austrian economists Ludwig von Mises and Friedrich Hayek, who argued that the state should let the free market prosper. In 1961, Charles returned to Wichita to work for his father. When Fred Koch died in 1967, Charles took the helm. He consolidated the company’s various arms, including its engineering, pipeline, ...

Lying for Money
8
Saudi Arabia’s royals are readying a revolution from above
7
Ukraine and the Art of Strategy
7
Who Owns South Africa?
5
India’s Growing Influence in the Middle East
7
Anti-System Politics
8