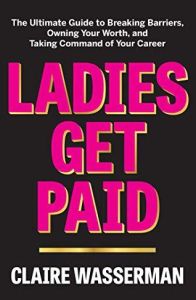 The Ultimate Guide to Breaking Barriers, Owning Your Worth, and Taking Command of Your Career

The review below was first published in the getAbstract Journal on Mar 30, 2022.
We’ve reviewed this title for you as we currently cannot offer a summary.

Gender equity advocate Claire Wasserman offers detailed – if perhaps familiar  – advice to working women on getting the pay and treatment they deserve.

Gender equity advocate Claire Wasserman, founder of the nonprofit Ladies Get Paid, explains that women often blame themselves when they fail to advance in their careers. But the wage gap and underlying discrimination are real, as Wasserman explains, so she offers women tools and strategies to fight both and move ahead. She delves into biased gender expectations, imposter syndrome and perfectionism, as she provides practical advice on networking, interviewing, negotiating a salary and getting promoted. Her message: Believe in yourself in order to take charge of your career and foster change.

For decades, books detailing strategies for success in the office have been bestsellers, with their most famous advice becoming koans guiding ambitious workers. But the 2000s have seen a rise of such books written for women and minorities specifically. Previously, apparently, most people bought into the illusion that the same tactics and principles worked for men and women – and for other often discriminated-against groups as well. Wasserman details how men and women work in different universes and how women must embrace tactics appropriate to their universe.

8
Book
The Adversity Hack
9
Book
Cyber Privacy
8
Book
The Manager’s Dilemma
9
Article
8 Hours a Day, 5 Days a Week Is Not Working for Us
Book