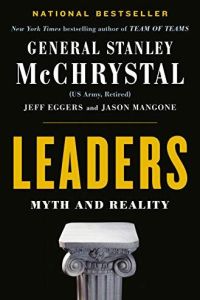 US Army General (Ret.) Stanley McChrystal, Jeff Eggers and Jason Mangone offer insight into leadership by using Plutarch’s device of comparing two leaders to one another. They discuss 13 historic figures – one stand-alone and six duos – in the context of six leadership archetypes: “Founders, Geniuses, Zealots, Heroes, Power Brokers” and “Reformers.” For example, they show how Founders Coco Chanel and Walt Disney inspired their employees despite being notoriously difficult bosses. The authors use compelling corporate, military and civic war stories to focus on the circumstances that create leaders and to discuss the human side of leading in a complex world.

US Army General (Ret.) Stanley McChrystal founded the McChrystal Group consultancy, where Jeff Eggers (former special assistant to President Obama) heads the Leadership Institute. US Marine Corps veteran Jason Mangone has worked at the Aspen Institute, the Service Year Alliance and the NYC Department of Veterans’ Services. McChrystal is also the author of the bestsellers Team of Teams and My Share of the Task.

Leadership centers on outcomes and on interactions among groups that influence those outcomes.

McChrystal, Eggers and Mangone begin with the ancient historian Plutarch (circa 46 AD–circa 120 AD), who chronicled and contrasted pairs of 48 Greek and Roman leaders in his book, Parallel Lives, often referred to just as Lives. He focused on leaders’ character, not their accomplishments, and held them to a high moral standard instead of viewing them in context.

The authors find that this reflects how people tend to view leadership, which they define as the process of influencing a group to move toward a defined outcome. People usually pay more attention to the goal or the leader than to the people or context around the leader. Like Plutarch, McChrystal, Eggers and Mangone offer paired profiles of great leaders to illuminate why leadership requires “being part of the feedback loop within a system” – not merely occupying a commanding role.

The Gift of Struggle
9
The Leadership Killer
9
From We Will to At Will
7
Words That Change Minds
7
Serve Up, Coach Down
6
The Fearless Organization
8