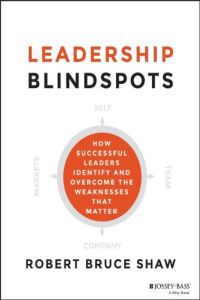 To inspire their followers, leaders demonstrate confidence in their abilities and decisions while keeping an open mind, remaining willing to change their thinking and guarding against mental “blindspots” that lead them astray. This is challenging, because most people don’t know they even have blindspots. In this knowledgeable, useful manual, management consultant Robert Bruce Shaw explains leadership blindspots and their causes. He tells you how to find and manage your blindspots. The book’s appendix includes a useful “Leadership Blindspot Survey,” also available online. With thanks for that, plus Shaw’s helpful diagrams, charts, lists and feedback worksheet, getAbstract recommends his insightful diagnoses and practical prescriptions to leaders at every level.

A JCPenney for Your “Blindspot”

After a century in operation, the JCPenney department-store chain needed a jolt of new energy. The firm named a new CEO, Ron Johnson, former head of Apple’s profitable retail division.

Johnson revamped JCPenney. He shifted the firm from its traditional role as a trusted supplier of private-label, discounted merchandise to a purveyor of popular brands at low prices. Knowledgeable insiders warned Johnson about moving too far and too fast. They reminded him that he was a stranger to JCPenny’s retail market. Self-confident and certain of his own vision, Johnson ignored all of that advice.

Johnson’s plan failed quickly. Without JCPenney’s usual deep discounts, previously loyal customers took their shopping elsewhere. The company suffered a $1 billion loss during Johnson’s first year as CEO. As one business-school professor put it, JCPenney “had been run into a ditch when he took it over. But rather than getting it back on the road, he’s essentially set it on fire.”

Mid-range fashion retail, where Johnson had minimal experience, was a big switch from selling iPhones in trendy Apple stores. Though he was in unknown territory...

Work Is Love Made Visible
8
Kissinger the Negotiator
8
Management Mess to Leadership Success
7
What Did We Know? What Did We Do?
8
Leadership in Turbulent Times
9
The Entrepreneurial Attitude
7