Summary of Lessons from the Road 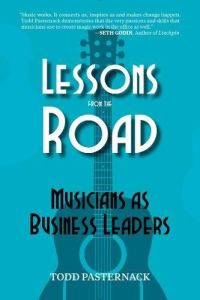 Todd Pasternack spent 10 years as a full-time touring musician. He spent endless days riding in vans, playing one-night stands, and dealing with many creative and logistical problems that he had to handle on the spot. From these experiences, he learned to trust his judgment, to recognize and go with the flow, and, quite usefully, to code. He has since built a thriving business in digital marketing and advertising. In folksy, conversational prose, Pasternack shares how bands and businesses – especially start-ups – face parallel or comparable circumstances. He offers lessons he learned in the world of music to help business leaders become more flexible, cooperative and creative. Pasternack interviews 10 former professional musicians who have all become successful businesspeople – most famous among them, Jimmy Chamberlain of the multiplatinum group Smashing Pumpkins – and adds their hard-earned wisdom and helpful tips to his own. Though you might find too many tidbits of Pasternack’s advice in other business books, his musician’s perspective is fresh and illuminating. getAbstract recommends his guidance to entrepreneurs, managers and anyone looking for a fresh take on day-to-day solutions.

Former touring musician Todd Pasternack is a digital marketing designer who works in strategy and product development as a consultant for major international corporations.

From 1994 to 2004, Todd Pasternack worked as a touring musician. He played in little-known bands that few people would recognize. He rode in vans with musicians, played the guitar and sang, and then rode in vans some more, night after night for weeks at a time. He then learned to code, and became a digital marketing and advertising consultant to large multinational corporations.

Pasternack worked with people he considered inspirational, original and reliable. Many of those individuals were former professional musicians. This led Pasternack to recognize the commonalities between playing in a band and working creatively in the digital world as well as in entrepreneurial businesses. He understood that just as “musicians tell stories through their songs,” most “brands tell stories” through their goods or services and their creative marketing.

Musicians and businesspeople both must accomplish these tasks: