Summary of Leveraging Privilege for a Greater Good 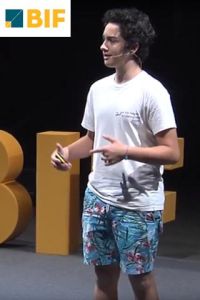 Part spoken-word performance and part activism playbook, this presentation by 16-year-old Royce Mann contextualizes a young man’s work of art and social justice. Mann, the self-proclaimed embodiment of white male privilege, starts with a performance of his competition-winning viral poem, “White Boy Privilege,” and then shares how he came to be a poet and thought leader for his generation. The influential teen includes the profound, sometimes humbling lessons he learned on his advocacy journey.

White males who understand that their privilege is a social injustice may still fear and resist change.

Anyone who’s not a white male pays the price of white male privilege; that is, people of other genders, races and cultural backgrounds suffer lifelong disadvantage and bias. Yet would an enlightened white male surrender his privilege to correct this social injustice? “Probably not,” admits poet Royce Mann, the self-stated embodiment of middle- to upper-class white male privilege.

Privilege is a “safety blankie” – that is, an ease and a comfort – and the alternative is frightening, he says. For instance, Mann never has to worry that his proclivity for swearing will fuel stereotypes about his race. He doesn’t fear law enforcement or feel pressure to wear cosmetics to conform to social standards of beauty.

However, there ought to be enough ease and comfort to mete out to all. Racism, classism, and other prejudices are an embarrassment to humanity and to a world that lays claims on equality. Instead of privilege for the few, everyone should have the right and opportunity to a fair shot in life.

Though today’s young white males didn’t invent their privilege, they benefit from it daily, sometimes unknowingly. For example, they tend to carry a sense of limitless opportunity and have access to the resources that make dreams happen.

The privileged bear the responsibility of transforming the prejudiced social ladder into an equalizing bridge. Even a middle-school boy absorbed with pubescent relationships and challenges bears this responsibility. As Mann’s first poetry slam judge – poet Gyasi Ross – explained to a junior high audience: “You are not the leaders of tomorrow; you are the leaders of today.”

When Mann’s poetic call for social justice went viral on YouTube, some people responded supportively. However, others railed against him, and some even wished violence upon him and his family. Still, Mann kept sharing his message on talk shows and other platforms across the United States, and his words resonated.

Through his activism, Mann learned many lessons, starting with understanding that true activism is humble. The message matters, not the messenger, so sometimes advocacy means staying silent so that others can speak. Similarly, activists must be willing to be students, not just teachers. Their platforms are a responsibility, one that involves honoring, understanding and living their cause as well as amplifying others’ voices. Indeed, everyone has a role in the movement, and individuals must reflect on where they can have the most positive impact. Finally, people should view their activism as a conversation and be willing to hear others’ opinions. This doesn’t mean compromising one’s own values but rather seizing every learning opportunity. Stay curious about other perspectives to build a human connection and discover common ground.

Royce Mann is an activist and poet. His spoken-word poem “White Boy Privilege” has garnered more than a million views on YouTube.