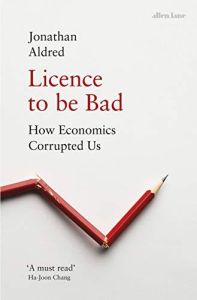 Licence to Be Bad

How Economics Corrupted Us

The review below was first published in the getAbstract Journal on Apr 1, 2021.
We’ve reviewed this title for you as we currently cannot offer a summary.

Economist Jonathan Aldred journeys through the history of economic theory to argue for a more humane, generous and collaborative society.

The director of studies in economics at Emmanuel College, Jonathan Aldred is also a lecturer at the University of Cambridge. His economics expertise and heartfelt belief in a collaborative society – along with his dry sense of humor – shine throughout this individualistic take on economic theory.

Neoliberal economics has received a great deal of criticism lately, and perhaps deservedly so. But knee-jerk accusations usually prove ill-informed and ideological. Aldred takes another tack by examining how economic theories and mind-sets have gone beyond the dismal science to infiltrate social behavior and attitudes. He highlights the complex relationship between society and often poorly understood economic ideas.

Where Does Growth Come From?
8
Podcast
How to Be a Memorable Manager
Book
The Five Dysfunctions of a Team