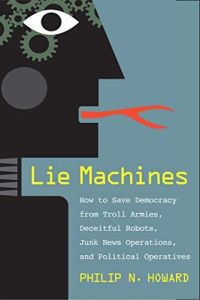 How to Save Democracy from Troll Armies, Deceitful Robots, Junk News Operations, and Political Operatives

The review below was first published in the getAbstract Journal on Oct 19, 2021.
We’ve reviewed this title for you as we currently cannot offer a summary.

The Spread of Lies

In this sobering analysis, Philip N. Howard – the director of the Oxford Internet Institute and a professor of internet studies at Balliol College – finds that leaders worldwide, in both democracies and autocracies, deploy communications technologies to influence people. Individuals, companies and governments leverage algorithms and other computational means, he details, to create “lie machines” that spread disinformation. Howard argues that voters thus become less capable of informed and thoughtful political decisions. But he insists that people can fight back, and he suggests how to do exactly that.

The Financial Times wrote of Howard’s book: “Its central premise – that this new stage in the evolution of the web has political implications that will match or even outstrip its commercial ones – is both striking and convincing.” David Kaye, UN Special Rapporteur on Freedom of Expression, commented that Howard, “refusing to wallow in the dystopia of it all...produces a must-read for the moment and a blueprint for the future.” Frank Pasquale, author of The Black Box Society, noted that Howard provides “cutting-edge research on disinformation and computational propaganda in a vivid, compelling manner.”