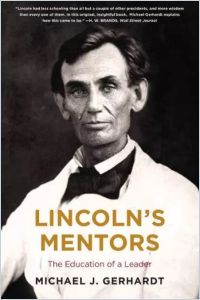 Abraham Lincoln lives in the common imagination as a political savant. However, his political success came about largely because he read avidly and selected and studied powerful role models including Henry Clay, Andrew Jackson, Zachary Taylor, John Todd Stuart and Orville Browning. Born in a log cabin, Lincoln received little formal education.A voracious reader, he turned to a chosen few leaders for guidance. By the time he won the presidential election in 1860, Lincoln –thanks in part to his mentors – had risen far above his humble beginnings.

Michael Gerhardt is the Burton Craige Distinguished Professor of Jurisprudence at the University of North Carolina at Chapel Hill.

Abraham Lincoln set out to be one of America’s greatest presidents.

Without Abraham Lincoln’s leadership during the Civil War, the United States might still be two nations. Lincoln succeeded against long odds. He gained election despite a thin résumé that included only one term in Congress. He possessed no particular leadership experience. A small-town lawyer with a brief episode of military experience during the Black Hawk War, Lincoln also lacked the credentials of a great leader.

Lincoln excelled in large part because he closely studied a handful of role models. Several were prominent politicians, men whom Lincoln could emulate as he learned to campaign and then worked to guide a troubled nation.

Throughout his life, Lincoln looked to these men as mentors: