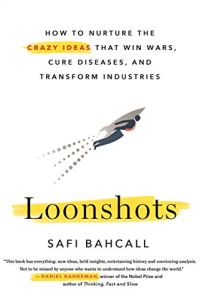 Physicist Safi Bahcall’s original, entertaining take on managing innovation draws on decades of science, economics, psychology and history. He says that new innovations – which he calls "babies" – need protection from big organizations, or “beasts.” However, he adds, the babies also need the beasts to test them, give feedback and put them into action. Bahcall erects a fairly rigid wall between his notions of “artists” as creatives and “soldiers” as implementers, and he stumbles slightly when explaining his emphasis on structure over culture as the foundation for innovation. That doesn’t limit his insightful, inspiring portraits of seminal innovators, including Telephone’s Theodore Vail, Pan Am’s Juan Trippe, Polaroid’s Edwin Land, American Airlines’ Bob Crandall, the US Office of Scientific Research & Development’s Vannevar Bush and Pixar’s founder Ed Catmull. Despite Bahcall’s at times too-generous estimation of his own systems of classification and hierarchy, his smart rundown gives you access to some of the most important ideas of the 20th and 21st centuries.

To innovate successfully, focus on the process, not the culture.

Physicist Safi Bahcall offers the thesis that “the most important breakthroughs come from loonshots – widely dismissed ideas whose champions are often written off as crazy.” Moonshots, like sending a person to the moon, attract money and fanfare. Loonshots don’t. Bahcall describes the way they progress in obscurity. But when the right teams come together and when a powerful champion protects early ideas and connects them to everyday operations, loonshots can change the world.

Innovation arises more often, Bahcall asserts, from loonshots than moonshots. He believes success stems from emphasizing structural change rather than from building a culture of creativity – a setting in which everyone creates. He also believes that “soldiers” matter as much as “artists.” If everyone is an artist, he says, the machinery of a business and its ability to test, scale and improve innovations and deliver them to buyers atrophies, bringing the organization to a halt.