Summary of Magic and Loss 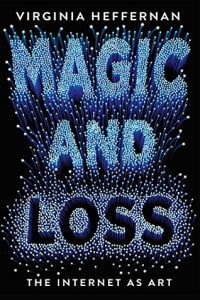 When New York Times Magazine contributor Virginia Heffernan first saw Funtwo, a virtuosic amateur guitarist, perform on YouTube, she was mesmerized. She watched again and again. A writer at work amid the decline of print, Heffernan realized that the world of ideas and knowledge was going digital, and she dove in headfirst. She found that the best way to approach “digital forms” was through art and literary criticism. And she identifies the Internet, itself, as a sprawling, collective work of art that engages the mind and the heart. Heffernan sees it as civilization’s greatest achievement. Attuned to its esoteric nooks and crannies, she provides the web with an overarching aesthetics. Heffernan is an elegant, eloquent, intellectually ambitious writer. She seeks to build an exhaustive aesthetics of the Internet, touching on its chaotic design, the poetry of texting, and of images, video and music. She gives her sophisticated commentary a personal touch by including anecdotes from her childhood as the daughter of a literary academic, her early digital adventures, her introduction to web culture and her struggles with spirituality in the digital age. Although she has a Harvard PhD in English, Heffernan isn’t a systematic thinker, and her book inevitably falls short of her vaulting ambitions. In her exuberance, and quest for synthesis, she often glides over the psychological and political impact of the dominance of certain platforms like social media. Still, getAbstract recommends her fluent, illuminating text to anyone fascinated by the Internet culture.

Regular contributor to The New York Times Magazine Virginia Heffernan has a PhD in English from Harvard University.

In 2006, academician and writer Virginia Heffernan clicked on an image on YouTube, a video-sharing site then only three months old. She saw a young man in a T-shirt and baseball cap playing Pachelbel’s Canon on an electric guitar. The guitarist’s name was Funtwo, and he called his video Guitar. The video was homemade and amateurish, but the performance was virtuosic. Though the video lacked MTV’s high production values, it was mesmerizing and addictive: Heffernan watched it again and again. Guitar garnered one million views in its first week online; by 2016, people had viewed its various incarnations more than 10 million times.

Confident Digital Content
7
Taking the Work Out of Networking
8
Crushing It!
9