Summary of Making in America 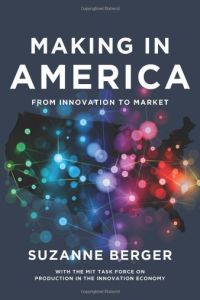 Suzanne Berger, co-chair of MIT’s Production in the Innovation Economy project, reports on MIT’s research and analysis of US manufacturing. She stresses manufacturing’s vital importance in maintaining the US as a global innovation leader. Her wise recommendations center on revitalizing US manufacturing and aligning it with future technologies. getAbstract recommends her cogent historical overview, practical solutions and insights about the future to investors, entrepreneurs, business owners, start-ups, innovators and anyone in manufacturing.

Suzanne Berger is the Raphael Dorman-Helen Starbuck Professor of Political Science at MIT and co-chair of MIT’s Production in the Innovation Economy project.

The Decline of US Manufacturing

American manufacturing is in steep decline so manufacturing jobs also are down. The United States’ global share of the high-tech manufacturing market was 28% in 2010, a drop from 34% in 1998. In 1980, approximately one in five US workers held a manufacturing job; now it’s one in ten while about one of every five German, Japanese and Italian workers is in manufacturing. The rise in US unemployment since 2008 is due in large part to the disappearance of manufacturing jobs. The ones that remain don’t pay as well as past jobs and offer fewer benefits.

In 1960, nearly one in three US workers was in manufacturing and earned good wages. Manufacturing sparked innovation, and innovation sparked manufacturing. In those days, most US manufacturing firms worked through the same elaborate “product cycle,” based on a full scaling-up, standardization and mass production. Reliable US products offered superior performance.

Now, thanks in part to globalization and the emergence of Asia as a manufacturing powerhouse, American inventions get produced – from the start – somewhere else, usually in Asia. The first iterations of Apple iPads and iPhones...

What's Your Competitive Advantage?
9
Mapping Innovation
8
Straight Talk on Trade
8
The Master Switch
9
The Truth About Your Future
9
The Haier Model
8