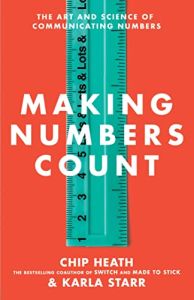 The Art and Science of Communicating Numbers

The review below was first published in the getAbstract Journal on Jul 22, 2022.
We’ve reviewed this title for you as we currently cannot offer a summary.

Stanford Business School professor Chip Heath and co-writer Karla Starr find that “nobody really understands numbers.” The human brain can’t recognize, at a glance, a number of items greater than five. However, when you translate numbers into analogies, comparisons and conversions, someone who struggles with simple arithmetic can easily grasp numbers. Heath and Starr’s clever, practical guide, teeming with fun examples, teaches basic principles that can improve how you understand and convey numbers in a world that is growing more number-dependent daily.

The human brain can recognize a number of objects up to five without counting them. Perceiving a greater number of items is tricky. In fact, several languages around the world lack words for numbers beyond five. The greater a number, the less real it feels. When people can’t envision what numbers represent, their decision-making suffers.

Made to Stick
Book
Switch