Summary of Managing Conflict at Work 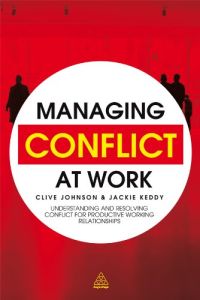 Office disagreements that become prolonged disputes can be frustrating to resolve and can cause your firm’s productivity and profitability to suffer. Mediation sessions can last for hours or days. During these sessions, participants may attack each other, curse the mediator or act in other unpleasant ways. Conflict resolution specialists can apply alternative dispute resolution methods to settle disagreements that might otherwise move to the courtroom. Mediators Clive Johnson and Jackie Keddy comprehensively detail the best practices for conflict management and resolution and provide knowledgeable advice about putting these concepts to work. getAbstract recommends their tactics to HR managers, front-line managers and others who must squash office squabbles before they turn into protracted battles.

Business consultant, trainer and coach Clive Johnson and consultant and mediator Jackie Keddy are the co-founders of the International Conflict Management Forum and The Janus Partnership.

Discord can arise anywhere, including in offices across the globe. Workplace conflict is an enormous drag on productivity and profitability. Organizations in the United Kingdom spend almost ₤40 billion [approximately more than $60 billion] annually to resolve clashes, and companies in the United States spend almost $300 billion annually on employment disputes that move to litigation.

Workplace conflicts’ typical triggers include paranoid feelings among employees, maladjusted workers and managers’ inability to reduce this uncertainty among the members of staff about their future job status. When work brings people together, they generally get along well. After a while, however, a “pinch-crunch conflict cycle” develops. When employees feel their organization or their colleagues are violating their rights, that’s a pinch. After a few pinches, an aggrieved worker will strike back at a perceived aggressor...

The 7 Principles of Conflict Resolution
7
Turn Enemies into Allies
9
Why Are We Yelling?
8
The Loop Approach
8
The Power of Understanding Yourself
8
Future Politics
9