Summary of Marissa Mayer and the Fight to Save Yahoo! 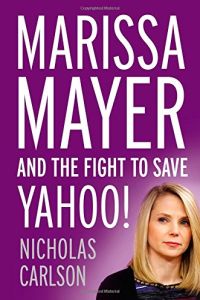 If Verizon’s early 2017 plan to buy Yahoo goes through, news reports say the company will take a new name, Altaba, and its sixth CEO, Marissa Mayer, will step down with a multimillion dollar severance package. In his book’s title, Business Insider chief correspondent Nicholas Carlson cites Mayer first, but he proceeds to present an inside history of Yahoo – and by extension, the Internet – from its beginnings in 1994 through Yahoo’s near total collapse in 2014 – ending before the 2017 pending sale. The successive wins and losses of Yahoo’s pre-Mayer CEOs, and the backroom plotting of its board members and investors, offer as fascinating a story as Mayer’s ill-fated attempts to “save Yahoo.” Mayer’s rise at Google provides an absorbing parallel to Yahoo’s decline, the story of Silicon Valley and the web. Her early wins and ensuing missteps read like a classical tragedy. getAbstract recommends this gripping page-turner to anyone interested in Yahoo, Mayer or the history of the Internet – right up to today.

Business Insider chief correspondent Nicholas Carlson has won awards for his exposés of several Internet companies, including Facebook, Twitter and Groupon. He won Digiday’s award for “Best Editorial Achievement” of the year for his coverage of Yahoo. A frequent guest on CNBC, he contributes to the Bloomberg biography series, Game Changers.

The Fastest-Growing Company in the History of the World

Yahoo emerged as an early competitor on the web in 1994 when David Filo and Jerry Yang posted a list of their favorite websites to a Stanford University server. The list grew in size and popularity, and Stanford asked Yang and Filo to move it to their own servers. Turning down a $2 million offer from America Online CEO Steve Case, Yang and Filo took $1 million from Sequoia Capital. They hired Tim Koogle as CEO and Jeff Mallett as COO. He drove Yahoo hard, making it the fastest-growing company in business history. In the 1990s, amid that boom, “Yahoo was the Internet.” On January 3, 2000, it had almost 4,000 employees and was worth $128 billion.

The way Mallett organized Yahoo, almost everyone on staff contributed to new product development. Like start-up CEOs, young MBA graduates got to run their own product operations. The leadership team – Yang, Filo, Koogle and Mallett – worked in cubicles alongside their workforce. Yang led international expansion efforts, Koogle inspired the troops, Filo stuck with coding and Mallett built the company. In the late 1990s, every start...