Summary of Marketing the Moon 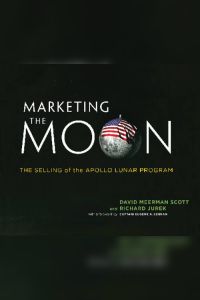 Marketing and PR experts David Meerman Scott and Richard Jurek’s beautifully produced case history of the selling of America’s Apollo space program is an anecdotal guide to promoting an industry. Scientist Wernher von Braun, a major figure behind Apollo, said, “Without public relations…we would have been unable to do it.” This is a coffee table book, written by marketers rather than journalists, so the telling is sometimes incomplete, and the goal is less to analyze than to highlight. Still, getAbstract finds that the book is worthwhile and intriguing, as a marketing manual and as a historical record, filled with interesting side stories and photos of artifacts and documents. Armies of reporters, PR agents, marketing executives, engineers, politicians and bureaucrats worked – more together than not – to attract public support for Apollo. In part, the collaboration functioned because the undertaking proved so spectacular that it awed even its greatest critics. Now, the question remains: Who lost the US public’s interest in space travel?

The public moment that marked the beginning of the race to put an American on the moon came on May 25, 1961. Speaking before Congress, President John F. Kennedy set the space agenda, and also the timetable: “before the decade is out.” Eight years later, on July 16, 1969, the Apollo 11 spacecraft lifted off from the Kennedy Space Center in Florida carrying three astronauts and reached the moon orbit three days later. On July 20, the lunar module descended to the surface of a foreign planetary body, and astronauts Neil Armstrong and Buzz Aldrin stepped out for a walk.

This triumph stemmed from American confidence, expertise, daring and public will. Scientist Wernher von Braun – the charismatic head of NASA’s Marshall Spaceflight Center – said that none of it would have been possible “without public relations and good presentations of these programs to the public.”

The Apollo project is “the most important marketing and public relations case study in history.” The marketing challenge was to introduce the public to a culture with its own vocabulary, knowledge base and even “celebrities.” A parallel challenge was to recast...

The New Rules of Marketing & PR
6