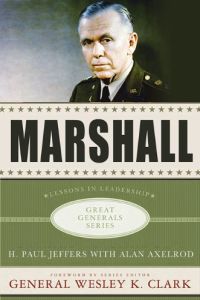 George Catlett Marshall Jr., a revered soldier and statesman, served as US Army chief of staff during World War II and later as secretary of state and secretary of defense. A born leader, Marshall was, as Sir Winston Churchill described him, “the noblest Roman of them all.” He stood resolute for what he believed and, as authors H. Paul Jeffers and Alan Axelrod make clear, the world is a better place because he did. Indeed, Europe would not exist in its present state if not for the Marshall Plan that rebuilt its shattered nations after World War II. getAbstract recommends Jeffers and Axelrod’s short, readable biography to those interested in the attributes that leadership demands, as demonstrated by the luminous life of George Marshall.

George Catlett Marshall Jr. was born in 1880 in Uniontown, Pennsylvania. He attended the Virginia Military Institute, graduating as the top cadet officer. To win an Army officer’s commission, Marshall traveled unannounced to the White House, managed to meet with President William McKinley, asked for a commission and got it, even though McKinley had no idea who Marshall was.

Marshall held numerous US Army staff assignments and developed a sterling reputation as a “teacher, a planner, a brilliant tactician, a peerless logistical manager – in short, the ideal staff officer.” Some of his men called Marshall “Dynamite.” One referred to him as the “Wizard.” A senior officer’s efficiency report cited Marshall as a “military genius.”

During World War I, General John J. “Black Jack” Pershing commanded the American Expeditionary Force (AEF) in France. Marshall became Pershing’s “fastest-rising officer” while he worked on preparing America’s untested forces for action. He spoke bluntly, always telling the formidable Pershing exactly what the AEF needed to do to improve its operations. He never pulled his punches. After the war, Marshall continued to work for...