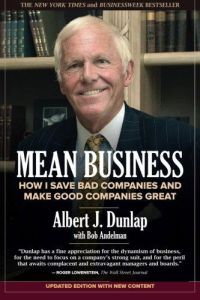 The review below was first published in the getAbstract Journal on Jan 21, 2021.
We’ve reviewed this title for you as we currently cannot offer a summary.

Liar, braggart and turnaround genius Al Dunlap reveals his hardheaded business strategies and successes in this entertaining and instructive – if not entirely true – memoir.

The late Albert J. Dunlap ran Lily-Tulip, Scott Paper, Sunbeam and General Electric. Bob Andelman is the author or co-author of 15 books. When Dunlap penned this 1966 memoir with Andelman, he stood tall in investors’ good graces. “Chainsaw Al” might have been a boardroom bully who fired thousands of people, but he could right corporate ships, boost stock prices and deliver profits – or so the myth went.

Yet, shortly after this book of memoir and business advice hit the shelves, Dunlap had a fall from grace and took on another persona: liar and charlatan. Turns out he had filled his resume with falsehoods and cooked the books at Sunbeam, the appliance maker that fired him and went bankrupt. His book says only that he retired; he expresses no remorse. The SEC accused Dunlap of fraud and barred him from publicly traded firms. Among the reports that lambasted his toxicity, Time listed Dunlap among 2010’s “worst bosses.”