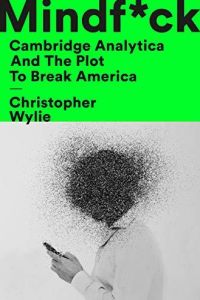 Although perhaps a little long-winded in enumerating the dangers posed when bad actors weaponize internet user data, Wylie shows that the threat to privacy and democracy alike is very real, and why regulation is sorely needed. Wylie paints a withering portrait of CA’s many misdeeds under Breitbart News editor Steve Bannon’s guidance, but notes no one involved in the CA scandal suffered any legal consequences. Facebook tried to squelch the story and still refuses to participate in necessary oversight. Political junkies will not be able to put this book down.

Christopher Wylie joined London-based data analytics and communications company SCL Group in 2013. Military and government intelligence agencies hired SCL (originally called Strategic Communications Laboratories) for tasks such as crafting counter-narratives to Russian propaganda in Eastern Europe and projects to thwart drug cartels and human trafficking in Latin America. As Wylie pointed out to SCL director, Alexander Nix, during his job interview, in the era of social media, targets offer up the information needed to persuade and manipulate them of their own volition. People with high levels of neuroticism or narcissism are most vulnerable to counter-narratives, Wylie notes. They’re more likely to believe they’re being persecuted or treated unfairly.

SCL’s work interested Breitbart News editor Steve Bannon, and, with investment capital from right-wing billionaire Robert Mercer, he opened a subsidiary of SCL in 2014 called Cambridge Analytica (CA). According to Wylie, Mercer and Bannon wanted to use CA to subvert the Republican Party and change American culture. They decided on the Virginia governor’s election for a test run of their idea. ​​​Wylie and his fellow researchers gathered data from multiple sources which revealed conservative voters found Republican Ken Cuccinelli’s messaging unpredictable – a trait Republicans, in general, tend to dislike. Once SCL changed Cuccinelli’s messaging to conform more to his audiences’ need for predictability, voters stopped caring that Cuccinelli himself was an oddball; they responded to his familiar-feeling talking points.

The Cambridge Analytica Files
9
The Billion-Dollar Disinformation Campaign to Reelect the President
9
How the Geography of Climate Damage Could Make the Politics Less Polarizing
9
The State of the Global Climate in 2018
9
Us vs. Them
8
The Digital Dictators
9