Summary of Misadventures of the Most Favored Nations 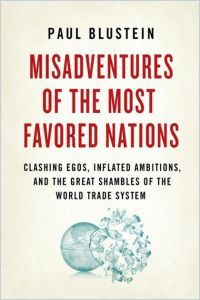 Veteran journalist Paul Blustein blames half the 2008 economic meltdown – the non-Wall Street half – on dysfunctional global trade policies, and then he explains why. World trade is an arcane topic, complete with mysterious acronyms, complex rules, and negotiators with huge egos and serpentine negotiating positions pushed by antagonistic nations. In an increasingly global economy, trade negotiations are never simple. Even so, Blustein manages to tell this provocative, complex, depressing story as engagingly as possible. At times the book bogs down in negotiating points that only trade technocrats will appreciate, but Blustein fleshes out the story by capturing the quirky, sometimes volatile, personalities involved. Accordingly, getAbstract recommends his book to those who can’t get enough about world trade. If you want all the ins and outs, you’ll be very happy here.

Paul Blustein is an award-winning business journalist who has written for The Washington Post and The Wall Street Journal.

The World Trade Organization (WTO), composed of 153 member nations, sets international trade rules with the goal of promoting global economic stability. Unlike the 10,000-employee World Bank or the International Monetary Fund (IMF), with its 2,600-member workforce, the WTO gets by with only a few hundred staffers. Yet it wields arguably greater power by enforcing trade rules that affect the economies of both industrialized and nonindustrialized countries. As true of any real democracy, the WTO’s structure makes it difficult to govern. Member nations share equal voting rights, and every member must adopt all WTO rules for them to pass; so any one member, regardless of its size or clout, can thwart a proposal. But membership does have its privileges: All WTO countries benefit from “most favored nation” status and thus enjoy equal trade advantages.

The WTO member nations – then numbering 142 – met in Doha, Qatar, soon after the September 11, 2001, terrorist attacks. Growing terrorism fears and a world economy heading toward recession pressed the participants to find ways to broaden trade liberalization’s benefits to the developing...

And the Money Kept Rolling In (and Out)
8