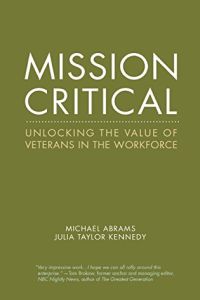 Because of their maturity, discipline, dedication, resiliency and can-do attitude, veterans can make fine contributions as civilian employees. Yet veterans with new civilian jobs often miss the camaraderie of military life and the sense of noble mission they felt while serving their country. Many veterans believe their civilian colleagues feel alienated from them, and often veterans quit within their first year in a civilian job. Former US Marine Michael Abrams and workplace innovation expert Julia Taylor Kennedy surveyed 1,022 veterans and conducted interviews and focus groups to learn what veterans need from their employers to feel comfortable in the workforce. The authors share workable suggestions on how companies can ease veterans’ entry into civilian work. getAbstract recommends this small but important and focused book to employers and to veterans who want to tap into all the available resources.

US Marine veteran Michael Abrams is the founder and president of Four Block, a nonprofit organization helping veterans secure rewarding careers in the civilian sector. Julia Taylor Kennedy is vice president at the Center for Talent Innovation.

Military veterans make great employees; they work hard, and are resilient, goal-oriented team players who accept responsibility for their actions. They are quick, confident decision makers accustomed to dealing with difficult circumstances, including life-and-death situations. Veterans are intent on good performance. They work well in “cross-cultural settings.” They dedicate themselves to their tasks and handle adversity well. Plus, many have advanced technical skills.

President Barack Obama urged the passage of tax incentives in 2011 to help returning veterans reenter civilian life. From 2011 to 2015, US corporate hiring of veterans increased 11%, for a variety of reasons, and “employment among veterans” reached close to that among non-veterans. However, most recent hires are former officers, not enlisted personnel, and female veterans and veterans of color were hired least often.

Often once companies hire veterans, they tend to forget about them. Employers seem to think they’ve done their duty by hiring veterans, so they can move on to another concern. Companies rarely pay attention to helping veterans...