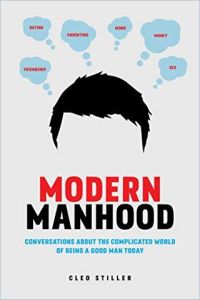 During this #MeToo era, many men suffer confusion about expectations in their relationships with women – and about masculinity itself. They may have had dates that went seriously wrong or problematic interactions with colleagues at work. The best way to navigate these gray areas isn’t clear, and men’s baggage about masculinity doesn’t help, says journalist Cleo Stiller, who brings together a variety of thoughtful voices in this user’s manual for being a man in the 21st century.

Journalist Cleo Stiller explores stories about health, gender and technology as they affect millennials. She has been nominated for Peabody and Emmy awards and won the Gracie Award.

The idea that men must be the dogged pursuers of women is obsolete.

The #MeToo era has caused a lot of men to question and reflect on their relationships with women and on the nature of masculinity itself. When they find gray areas, particularly in arenas such as dating, sex, money and work, some men suffer frustration and feel that society has gone too far.

Many of the numerous assumptions people make about masculinity and manhood have been brought into question during #MeToo. These include the idea that it’s a man’s job to pursue a woman and that he should provide financial and physical security. These attitudes can create problems, especially with dating.

For example, one man seeking a long-term, romantic relationship met a woman who intrigued him, but she told him she sought only friendship. Despite her hesitation, he pursued her across continents, expecting that persistence and dedication would win her over. He ended up heartbroken as he realized he probably should have been more attentive to her earlier clues, but he was driven by the archaic idea that a man must be the hero going after the woman – and the woman...