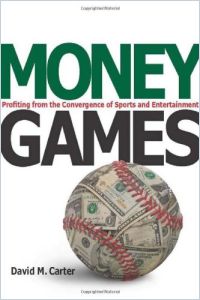 Whether you’re playing in a neighborhood softball game, watching the Super Bowl, or lining up a putt on your video game console, separating sports and entertainment is impossible. As technology becomes increasingly sophisticated and presents the American sports consumer with exciting new options, the business relationship between sports and entertainment in the US takes on added significance. David M. Carter, a professor of sports business, has compiled an exhaustive study tracing the development of the multibillion-dollar sports entertainment industry, from televised major league games to video gaming. Carter’s painstaking research makes the book ideal as an academic resource. While it requires more than a passing interest in American sports (if you don’t know a touchdown from a slam dunk, this may not be for you), getAbstract recommends Carter’s work, though his obsession with detail can detract from the narrative flow. Whether you are an industry insider or an interested outsider, Carter helps you follow the money and keep your eye on the ball.

Long before the introduction of ESPN, fantasy football or the Xbox, sports competitions entertained fans who supported everything from professional boxing to Major League Baseball. You can trace the convergence of sports and entertainment in the US to the first significant radio broadcast of a sporting event. In 1921, RCA radio station WJY ran a live broadcast of the heavyweight boxing championship match between Jack Dempsey and Frenchman Georges Carpentier (preceded on radio only by a lesser fight aired from Philadelphia the previous year).

Radio sports coverage remained popular for nearly two decades but proved no match for television. The first televised sporting event, a 1939 baseball game between Princeton and Columbia Universities, sparked the technological phenomenon that has evolved into a still-growing multibillion-dollar industry. In 1948, 190,000 television sets were in use in the US, but by 1950, due in no small part to the popularity of televised sports, more than 10 million TV sets had invaded American homes.