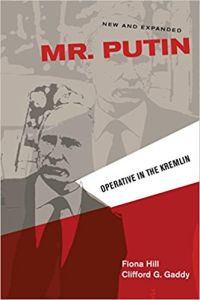 Brookings Institution senior fellows Fiona Hill and Clifford G. Gaddy paint a nuanced portrait of the enigmatic Russian leader once described as the “man without a face.” As US foreign policy experts, they go beyond the clichés in other Putin biographies to craft a more sophisticated view of what motivates him. They describe Putin’s past and his KGB career, and explore the way he developed his aggressive concepts of capitalism, foreign policy and internal security. With their painstaking research, political expertise and dispassionate style, Hill and Gaddy reveal a complex, cunning and sometimes contradictory man who demands to be understood on his own terms.

Fiona Hill is director of the Center on the United States and Europe at the Brookings Institution, where she is the Stephen and Barbara Friedman Senior Fellow in Foreign Policy. Clifford G. Gaddy is a senior fellow in the Foreign Policy program.

The Six Faces of Vladimir Putin

Vladimir Putin repeatedly puzzles Western leaders. German Chancellor Angela Merkel has said that he “lives in another world.” And, Putin regards his world quite differently than his Western counterparts see theirs. Putin’s worldview stems from many influences, including Russia’s singular history and culture, his personal experiences dating back to a scrappy childhood in Leningrad and the organizational cultures in which he spent his career. To decide what strategies to pursue in response to Putin, Western policy makers and politicians must first understand him.

Putin is a complex and multilayered man who incarnates six distinct, overlapping identities: The Statist, the History Man, the Survivalist, the Outsider, the Free Marketeer and the Case Officer. Putin has embraced these composites throughout his political career to guide his governing style and his domestic and foreign policy agenda.

When Putin took the helm as president of Russia in 2000, the state apparatus was in disarray. Russian elites of varying ideological positions believed Boris Yeltsin’s destruction of the post...

Ukraine and the Art of Strategy
7

The Long Hangover
9
Beyond NATO
9
Near Abroad
9

The Shoals of Ukraine
9