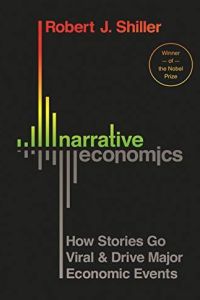 Prominent economist Robert J. Shiller argues that, to truly understand the economy, he and his fellow dismal scientists need to look beyond the usual data points. Stories are what really drive economic activity, the Nobel laureate contends in this important and insightful text. He says that economists pay too much attention to hard facts while giving too little heed to the stories that consumers and investors tell themselves and each other. Shiller breaks down how narratives work through examples spanning the Great Depression to the bitcoin craze. So if you're looking for a good story, pull up a chair...

Robert J. Shiller is a Nobel Prize-winning economist, the author of the New York Times bestseller Irrational Exuberance, and the co-author of Animal Spirits. He is a professor of economics at Yale University.

Stories, not data, are the most powerful force in economic behavior.

When human beings dream, they don’t conjure images of charts, graphs or data; they dream in stories. Story telling is deeply ingrained in the human brain. Economists have long overlooked the power of stories, but examples of economic narratives abound. Tales drive booms and busts in real estate and stocks. Narratives that focus on fear and suffering can deepen economic depressions, while expansions feed on the infectious optimism that often underlies greed.

Bitcoin, which launched in 2009, offers an example of the power of economic narratives. The mysterious founding of the cryptocurrency is part of its appeal: An otherwise-unknown person who went by the name of Satoshi Nakamoto created the virtual currency. Backed by imposing mathematical work, bitcoin relies on additions to public ledgers to create a digital version of money. Amid a yarn about the development of a currency untethered from government, bitcoin soared in value to $300 billion in just a few years.

How Should We Think about the Winners and Losers from Globalization?
8
The Value of Everything
8
From Wall Street to Bay Street
8