Summary of Never Give a Sucker an Even Break 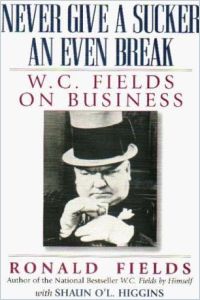 W.C. Fields’s grandson, Ronald Fields, draws on the comic’s biography, movie plots and sayings to illustrate key business principles. He covers such topics as leadership, creativity and innovation, managing change, effective teamwork, delegation, budgeting, office politics, and communication. Many of the ideas for business success are familiar, but the link with W.F. Fields makes them novel and entertaining. Appropriately, the book is written in a breezy style that makes it enjoyable to read, and Fields includes a summary of key principles at the end of each chapter. getAbstract particularly likes the collection of W.C. Fields’s humorous sayings at the end of the book. Even though some ideas and, for shame, even some sentences are repeated, the book has broad appeal for anyone who likes business and loves to laugh. If you’re thinking stocking stuffer or get-well gift, this’ll do.

Ronald Fields , the grandson of W.C. Fields, wrote the bestseller W.C. Fields by Himself. A playwright, he won an Emmy for the screenplay for W.C. Fields Straight Up. He has lectured on W.C. Fields and creative writing at more than 500 colleges and universities, and is currently the vice president of creative development at Hollywood-on-Air. Shaun O’L. Higgins is chairman and CEO of Print Marketing Concepts, Inc. He wrote several books, including The Newspaper in Art. In 1986, he began using movies to train new managers at Cowles Publishing Company in Spokane, Washington, and he serves as the director of marketing and sales at Spokane’s newspaper, The Spokesman Review.

The Heritage of W.C. Fields

W.C. Fields (born William Claude Dukenfeld) has long been considered a great comic genius, known for his vaudeville acts and his humor in silent films and early talkies. He also gained fame for his pungent one-liners, including, "Never give a sucker an even break!" "You can’t cheat an honest man!" and "You can fool half the people all the time... and that’s enough to make a good living."

To express his humor, he created a number of alter egos, such as Professor Eustace P. McGardle and Augustus Q. Winterbottom. He could find the humor in routine, everyday situations, such as buying a stamp or playing a round of golf. He also poked fun at bureaucratic bungling and difficult people.

He was born in 1880 just outside of Philadelphia and shortened his name to W.C. Fields so it would fit on a stage marquee. His father was a wholesale vegetable merchant and Fields often characterized his family as "poor but dishonest." Since he was the son of a merchant, he learned about running a small business as a child. When he was twelve, he got a job in a department store and, as a teenager, he helped his father sell fruits and vegetables from a street...