Summary of Never Out of Season 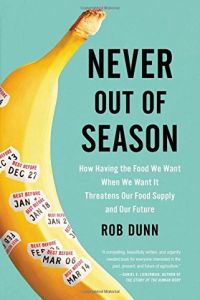 At one time, people ate only food that was local and in season, but not anymore. Food diversity has declined. Food is now homogenized. Professor Rob Dunn examines how dependence on single species of crops threatens human survival. He writes of the Irish potato famine, “chocolate terrorism,” a desperate race to save seeds for future generations, and more. Scientists have discovered more than 300,000 plant species, but “80% of the calories” people eat come from just a dozen species. Dunn warns that pathogens, pests, wars and famine can obliterate a society’s food supply. He explains that it’s urgent for qualified scientists and farmers to study and breed different varieties of crops. getAbstract recommends his report to consumers, food industry professionals, farmers, scientists and investors.

Rob Dunn, a professor in the Department of Applied Ecology at North Carolina State University and at the Center for Macroecology, Evolution and Climate at the Danish Natural History Museum, also wrote The Man Who Touched His Own Heart and The Wild Life of Our Bodies.

From 1845 to 1847, more than one million people perished in Ireland’s potato famine. “Late blight” – or, what then was called “potato murrain” – caused the famine. The potato isn’t native to Ireland, but it flourished there like no other crop. Ireland is a cool, wet island where other crops fare poorly. The Irish depended on potatoes for sustenance. Because the potato (specifically, the lump potato) provided total nutrition, especially when combined with milk, infant mortality decreased and life expectancy increased. In the mid-1840s, the Irish were poor, but not hungry. And then the potatoes failed.

Farmers and others blamed the cold, wet spring weather for late blight. Scientists thought the fungus Botrytis farinacea – renaming it Botrytis devastatrix or Botrytis infestans because of its devastation – was to blame. The situation worsened in 1846 and 1847. Scientists discovered that oomycetes caused late blight – not a fungus but a water mold. Wet, windy weather, such as Ireland experienced from 1845 to 1847, facilitated its growth and led to disaster.

Much of what people in the West...

We Need To Take CO2 Out Of The Sky
8
How to Walk on Water and Climb up Walls
9
The Unnatural World
9
Adapt Now: A Global Call for Leadership on Climate Resilience
8